Slap Shot (Book 14 in The Blake Boys Series) Excerpt I 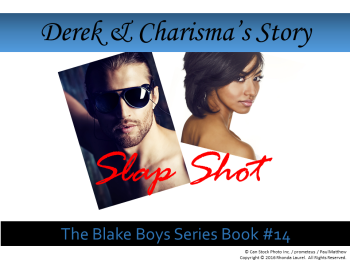 Prize Fight at the Slap Shot

Derek and Charisma “meet” for the first time.

When Derek arrived at his bar, he waded through the flashing camera lights and questions from the paparazzi without saying a word. The news of his breakup with actress Phoebe Palentz was trickling out faster than he’d hoped and he was being hounded everywhere he went.  It was bad enough his hiatus was getting off to a rough start, now this drama with Phoebe was taking over his life.

He’d decided to shut all of that out and focus on the renovation.  There was a lot of construction going on but all that bustling activity stopped when he walked into the main dining room.

“Ian, how are things?”  Derek shook his project manager’s hand. He was usually a pretty serious guy but today Ian had a big smile on his face.

“Everything is going great.  Wait until you see the smaller dining room.  We knocked out a wall and opened up that space.  There will be more room for multiple private parties.”

“Good.”  Derek looked around.  “Are we still on schedule for the grand re-opening?”

“Yes.  Construction will meet the target completion date.  It might be a good idea to get the interior design portion in motion.”

“I’m meeting with Jared’s assistant to go over the details.”  Derek scratched at his beard.

“The plumber should be arriving in an hour.  He’s refitting some of the pipes in the restrooms.”

“If you need me, I’ll be in my office.”  He turned to leave but Ian stopped him.

“You have a visitor.”  Ian’s cheeks burned.  “She popped in about an hour ago.  She insisted on waiting for you.”

Derek could hear the commotion coming from his office from down the hall.  It sounded like someone was tearing up the place.  He opened the door and ducked just in time to avoid being hit with the crystal hockey puck paperweight he kept on his desk.  It was Phoebe and she looked pissed.

“Phoebe, calm down!”  Derek took cover behind his high back desk chair.

“I will not!”  She scouted the room for something else to throw.

He cringed when she picked up the crystal decanter of scotch that was sitting on a table next to the leather couch.  “That’s really expensive liquor you have in your hand.”

“What the hell Derek!  How dare you break up with me right before the biggest movie release of my life?”

“I know the timing isn’t ideal but be reasonable.  We both know it hasn’t been working out for some time now. We fell into this relationship. And then there’s all the fighting.  Right now is a good example.”  He wanted to approach her but thought it was best to stay put.

There was a knock at the door.  He let out a sigh of relief.  He prayed Phoebe would stop the madness if there was an audience around.  She was obsessive about her image in the media.  Her PR people were branding her as America’s next adorkable girl next door and it wouldn’t be a good look if reports of her losing it surfaced.

A lump rose in Derek’s throat when Charisma Reed sauntered through the door.  She was early for their meeting but he was happy to see her none the less.  Jared and Morgan’s cousin certainly knew how to make an entrance.  They’d never formally met but he’d seen her in the bar a few times with that idiot Lamont Brayer. She was beautiful and had a sassiness about her that made her stand out.  He couldn’t understand why she ever dated Brayer. He never liked the pompous wide receiver.  He was brash and made no bones about expressing his dislike for Seth.  So it was no surprise when Seth and Lamont had that epic fist fight at Seth’s retirement party in his bar.  The events of that night was the inspiration for the renovation.

“Derek Popovich, you’re a hard man to pin down.”

“So I’ve been told.”  He could see Phoebe winding up to throw the decanter out of the corner of his eye.

“You’ve been cheating on me with this cheap skank?”  Phoebe screeched and hurled the decanter, hitting the painting behind him.  The contents splashed around the room and some of it landed on Charisma.

“What did you call me?”  Charisma dropped her purse into a chair beside her.

Derek moved from behind his desk with lightning speed but it was too late.  Phoebe had already charged at Charisma and it all went downhill from there.

If Charisma had known she’d be walking into a volatile lover’s spat, she would have worn more sensible shoes.  When she saw the media frenzy outside, she assumed they were there to get post season comments from the gorgeous hockey star.  The wily actress was throwing random punches at her but none of them made contact.  She did, however, manage to land one to Derek’s mouth.  Phoebe was plenty upset, she can only imagine what crap Derek told her before she walked in on them.  But it was impossible that the starlet didn’t know about his reputation.

Anybody who read a reliable gossip rag knew that Derek was known for fast and furious short-term relationships.  The good looks and combustible sex appeal had women throwing themselves at him, even while he was on the ice playing a game. He was voted Sexiest Distraction in the NHL for five years in a row for a very good reason.  Apparently Phoebe had delusions of changing him, like every other woman he’d dated before her.  But that didn’t give Phoebe the right to lump her in with the insanity.

By the time Derek was able to put some good distance between them, they’d moved to the main dining area.  The construction crew did their best not to stare but it was too entertaining.  Derek tried to calm his ex-girlfriend down but she wouldn’t cooperate.  Charisma sighed.  Is this what she’d looked like when she was with Lamont?  Manic and desperate?

“Phoebe, you have this all wrong.”  Derek protested.

“You’ve been avoiding me for weeks.  And to think I came to Philadelphia to spend your birthday with you.”  The actress panted.

“I’ve been busy.  I told you I needed time to focus on work. In case you missed it, we didn’t advance to the finals.”  He ran a hand through his hair.

“No, you were sneaking around behind my back.  That’s why you didn’t have time to call.” She leered at Charisma.  “And clearly you’ve lowered your standards. She’s fake from top to bottom.  That isn’t even her real hair.”

“I gave you a pass in the office but I will beat your ass senseless.”  She stalked toward the belligerent star but Derek grabbed her by the waist and picked her up. “Put me down!”

“Don’t move.”  Derek commanded as he planted her behind the bar next to the row of beer taps.  He sped back around in time to catch Phoebe coming their way.  “Phoebe, it’s over.  I think we both know we fell into this relationship and now it’s time to get out.”

Phoebe continued to hurl expletives as Derek slung her over his shoulder and headed for the door.  Charisma spied her reflection in the mirror behind the bar and smoothed the few strands of her hair that were out of place.  She pulled back the protective plastic cover on the bar and retrieved a glass.  She wanted something more potent but all she could find was some club soda in one of the mini fridges underneath the counter.  She sipped her beverage and contemplated her next move.  Derek would probably be outside for a while trying to calm Phoebe down.  It was time to leave.  She could always come back in a few days.  The best way to make her escape would be the service elevator.  The last thing she wanted was to get caught up in the mess that was Derek’s very public love life.

She returned to the office, carefully stepping over the broken glass on the floor.  She held up her ten thousand dollar purse and groaned at the scotch stains splattered on it.  It was one of the few things Lamont had given her that she kept and now it was ruined.  Maybe it was the Universe’s way of telling her it was time to let go of material things and to stay away from athletes.  Hot men like Derek was the reason women like her lost all common sense.

In case you missed it!